WHICH OF THE LEICA R CAMERAS SHOULD YOU GET? 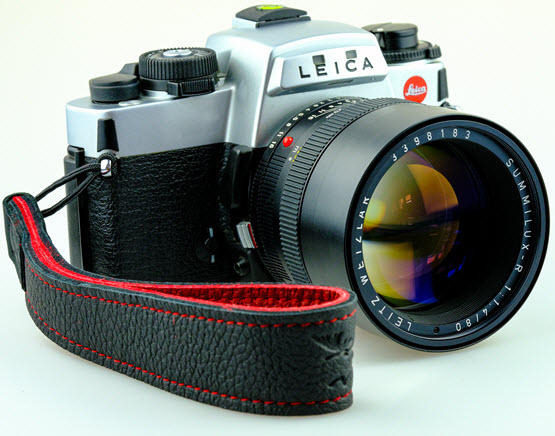 The LEICA R series replaced the LEICAFLEX cameras in 1976. Due to their uncompromisingly high-quality workmanship, the latter were so expensive to manufacture that LEICA had to offer them below its own manufacturing costs in order to sell them. (See also my article about the LEICAFLEX SL2)

Twelve different cameras were built from the LEICA R series. The number is therefore larger than the designations R3 to R9 suggest. This is due to the fact that some of the cameras were either developed in a further stage of development or a reduced version with the same numbering.

If you think that the newer cameras with the higher numbers are automatically the recommended models, you will be surprised.

The LEICA R3 was the first camera developed together with MINOLTA. It was equipped with aperture priority, a metal lamella shutter and both integral and spot metering for exposure. It had a few teething troubles, which were then gradually remedied. Even the relocation of production from Germany to Portugal shortly after the start of production led to fluctuations in quality at the time. (In the video of "Analog Insights", further down, for example, the mirror sometimes only folded halfway up when releasing the shutter - half pictures were the result) About 70,000 units were built by her, most of them black, only a few thousand in silver and olive (Safari-Edition).

The R bayonet was taken over from the LEICAFLEX series, but only with the so-called 3cam versions of the R lenses all functions of the camera can be used. At that time LEICA offered the service of upgrading 1cam and 2cam lenses to 3cam, which many customers took advantage of at that time. In order to further reduce production costs, these cameras were then manufactured in Portugal.

The LEICA R3 is essentially identical in construction to the XE-1 from MINOLTA, which was already two years on the market when the LEICA R3 was introduced.

This video informs you about the small but important differences:

I bought my LEICA R3 on eBay. This camera came in top condition (like new) from a collector's stock and cost "only" US$ 299 including the motor and the original packaging (OVP).

But without the lens: This is the very, very good 21mm SUPER-ANGULON-R f4 from LEICA, which I will report about separately on my website. 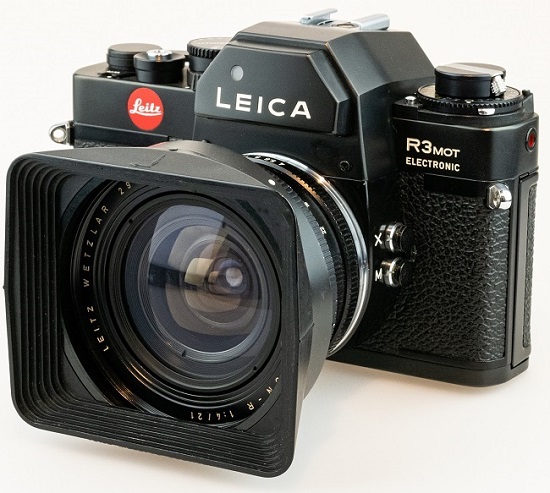 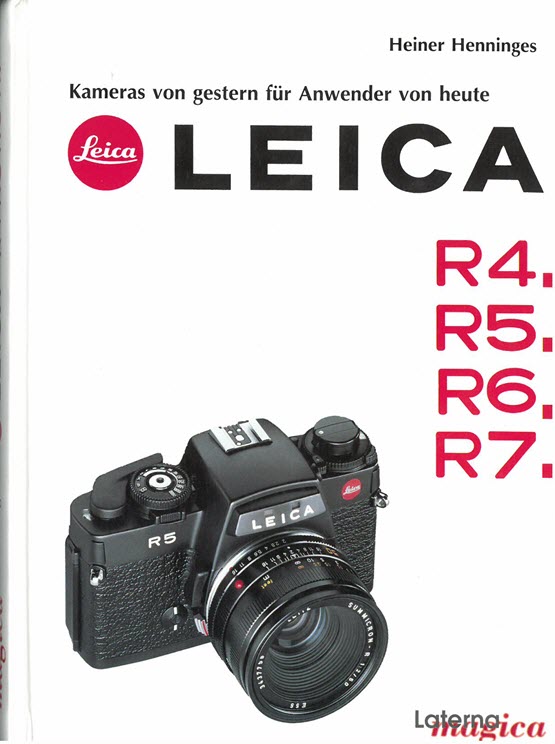 The R4 was equipped with the technology of the XD-7 from MINOLTA and got in addition to the automatic shutter control also an automatic aperture control, an oscillating mirror (so low in vibration that a mirror pre-triggering was omitted), a standard design for motor drive, as well as a design with somewhat rounder shapes, which was then essentially preserved until the R7. Also the R4 was delivered (like the R3) essentially in black.

The R4s was the result of the price war with the Japanese manufacturers and was offered cheaper without the aperture and program automatic. Otherwise identical in construction with the R4.

The book by Heiner Hennings from the publisher "Laterna Magica".

Heiner Hennings was editor-in-chief of the magazine LEICA FOTOGRAFIE for a long time - hardly any outsider knew the company LEICA and its products as well as he did. This book can only be found in antiquarian bookshops; if you want to delve deeper into the subject matter, you should take the trouble to find a copy.

TTL flash control, 1/2000 sec instead of 1/1000 sec, a modified data display in the viewfinder and a built-in diopter correction were the main differences to the R4. In addition there was a better dust protection. About 50.000 units were built of the R5.

There was also a cheaper version of the R5, which - like the R4s - was identical in construction except for the aperture and aperture priority. 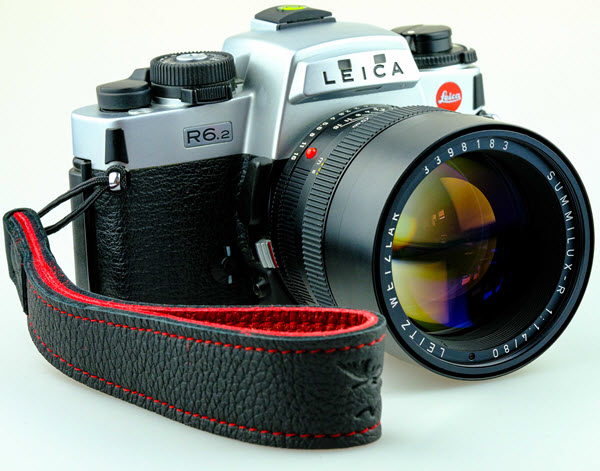 The LEICA R6 was not a successor of the R5 - this was the R7. The R6 was a completely independent series, which was produced parallel to the R7 until the end. With the R6 LEICA again focused on professional photographers. It had no more aperture and shutter speed automatics, it was again a purely mechanical camera which only needed electricity for exposure metering.

As with all LEICA cameras, there was also a black version of the silver camera. As with the LEICAFLEX SL2, the black camera is more in demand and therefore more expensive than the silver version.

I could buy both cameras practically new, both on eBay. Both cameras then also got the hand strap from Eddycam, which they now also offer in the LEICA colours black/red (and now also with red stitching).

The best book about the LEICA R-series was written by Brian Long. You can still buy the book new, for less than thirty dollars - highly recommended! 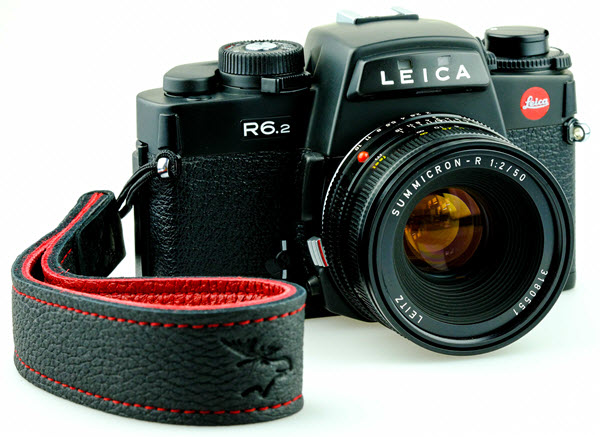 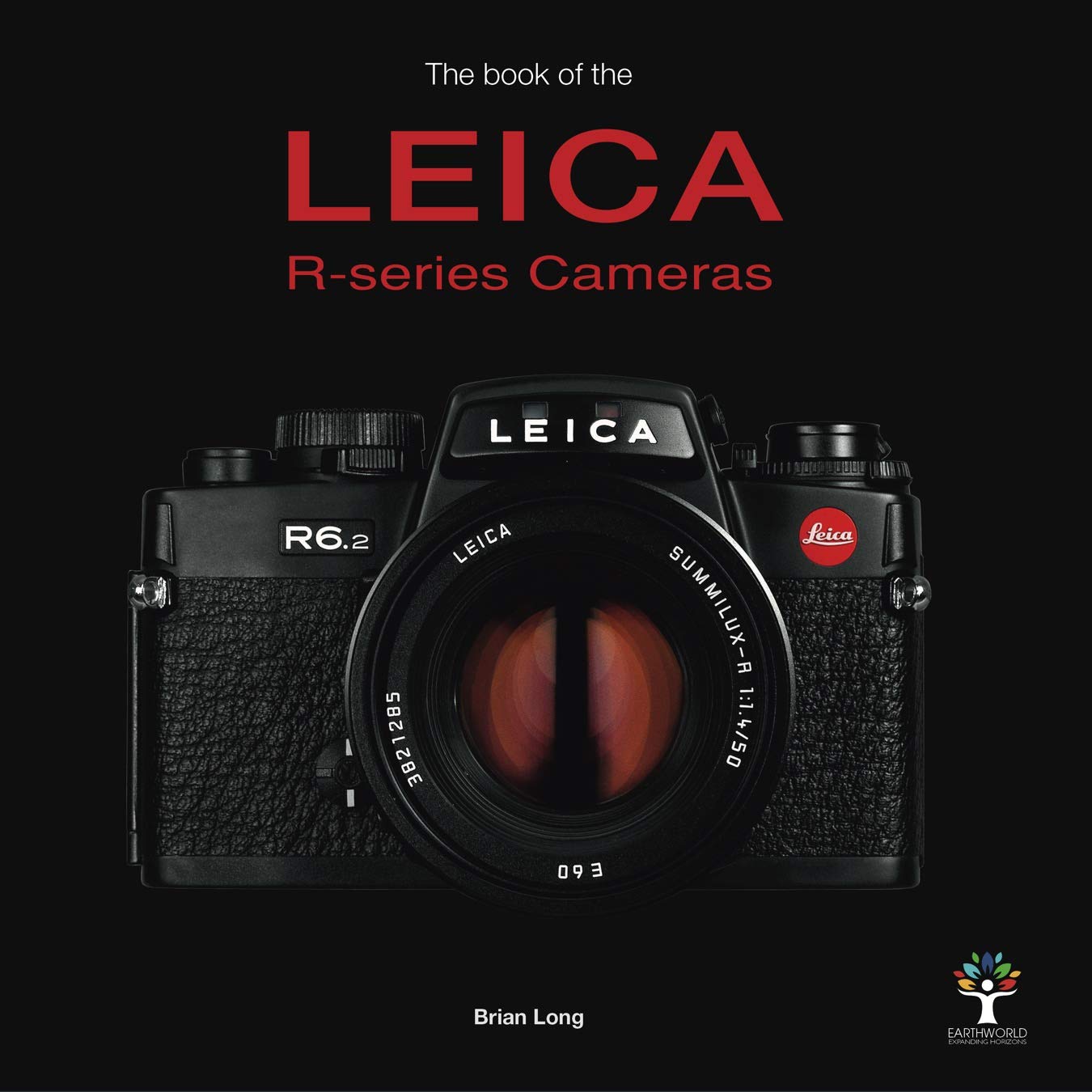 An unloved model that you can buy for a reasonable price. The reason is the thicker bottom cover, which makes the camera bulky. It was necessary to accommodate additional electronics (microprocessor control). I do not recommend this model, the electronics can always stop working with such old cameras.

Interesting websites about the LEICA R-series 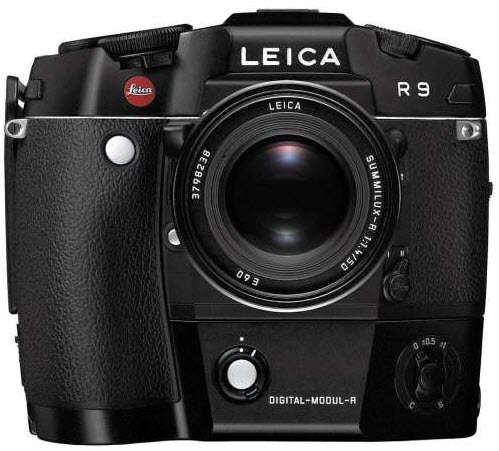 WHAT YOU SHOULD KNOW BEFORE YOU BUY AN R8 OR R9

In 2009 LEICA handed over all spare parts for repairs of the R series to the company Paepke-Fototechnik in Düsseldorf.

As you can see from the website of the company Paepke, only the cameras R3-R7 can be sent in. There are no more spare parts for the R8 or R9 cameras, repairs are not possible any more.

So if there is a defect in the electronics, you can only drop the R8 and R9 cameras.

COMPATIBILITY OF CAM AND ROM LENSES

ROM lenses are newer and have a nine-electrode contact strip on the back of the bayonet to transmit data from the lens to the camera.

The older CAM lenses do not have this ROM contact strip.

Basically I would recommend to buy only 3CAM lenses if you don't want one with ROM contacts. 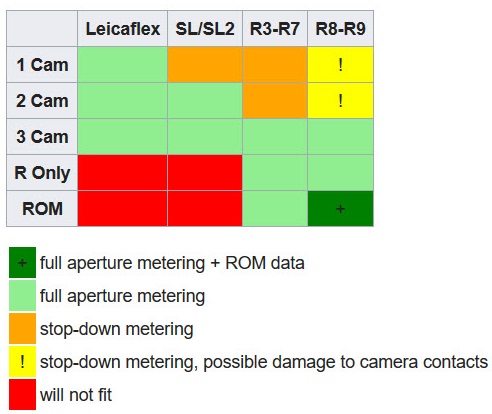 What may initially appear to be its biggest disadvantage in my eyes is its biggest plus: no electronics, everything is mechanical - only the light meter is dependent on a power supply.

Where there are no electronics, none can break down. Soldering joints, transistors, circuits - all these have a limited life span. The LEICA R6.2 is mechanical and can even be used without the built-in light meter.

Also Brian Long, by far the best author of a LEICA R-series book, seems to have chosen the R6.2 as his favourite - it is pictured on the cover of his book (see above).
The R6.2 has a top quality finish and for me there is only one competitor from LEICA among the SLR's:

The LEICAFLEX SL2 had been designed and built with no consideration for cost. The manufacturing costs were so high that LEICA was losing money with every camera sold.

The R-series, developed with extensive help from MINOLTA, was designed with economic considerations in mind and to further reduce costs, the manufacturing was moved from Germany to Portugal.

The LEICAFLEX SL2 is a tanker, solid and of high quality, exceptionally elaborately built. With the LEICA R-series one had to save on manufacturing costs in order to be able to earn something at competitive prices; but that is whining on a very high level, the LEICA R 6.2 is also a really good camera. 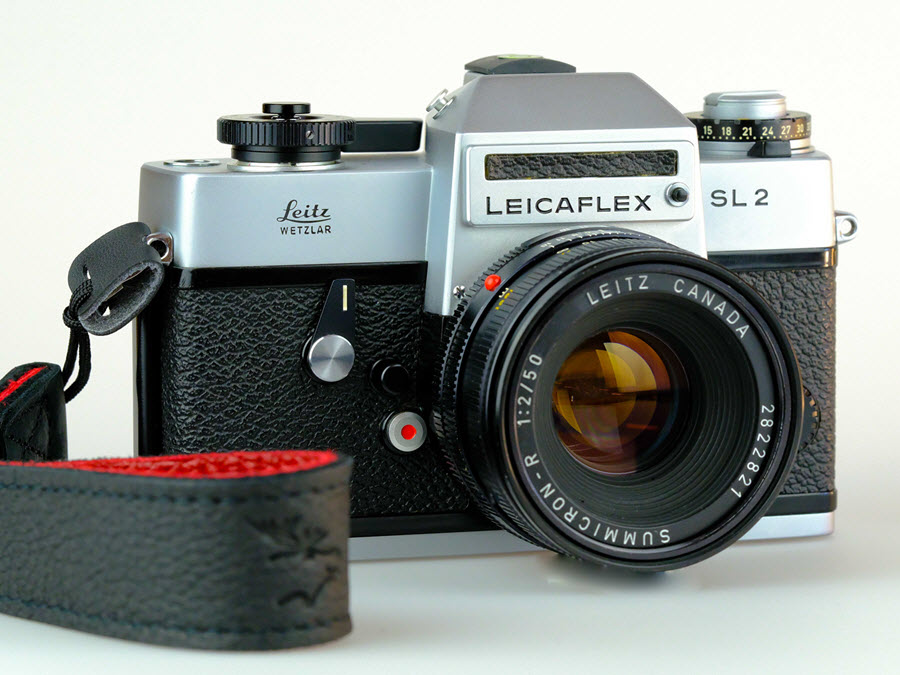